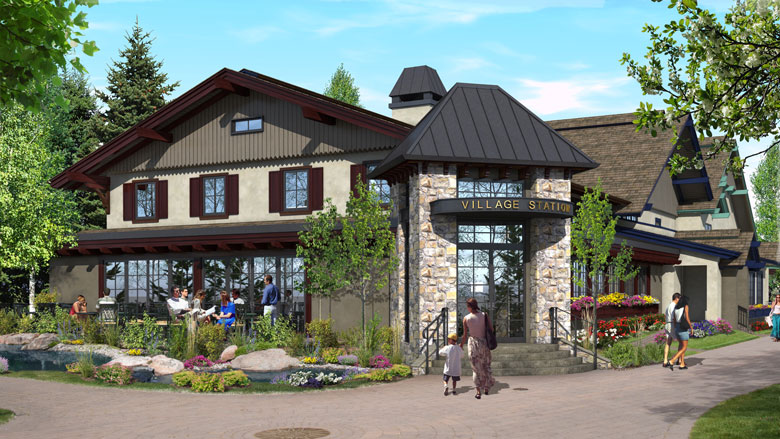 Bald Mountain Pizza in the Sun Valley Village closed for the final time Sunday, with the resort giving the space an extensive makeover.

BoiseDev first reported on the updates to the Sun Valley Inn building earlier this year – but resort officials have released a few additional details.

Bald Mountain will be revamped and renamed The Village Station when it reopens in December.  A menu of pizza, pasta and salads will be featured in the new restaurant, and it will retain its family-friendly vibe.

Renderings show a new patio space relocated around the corner from the current spot, with larger windows and a new corner entrance.

Next-door neighbor The Ram restaurant will be remodeled as well with an overhauled display kitchen serving as the centerpiece.

The Inn Lobby Lounge will be renamed The Ram Bar and will also be updated. The remodel there will featured “wooden floors, a new fireplace, new seating, and new big screen televisions.”

“The Konditorei will be open for dinner starting Monday, August 14 (right now, they are only open for breakfast, lunch, and Sunday brunch) until the Village Station opens this winter,” she said.

The project will also bring updates to 25 guest rooms at the Sun Valley Inn, with the remaining 80 rooms seeing an overhaul in the fall of 2018.