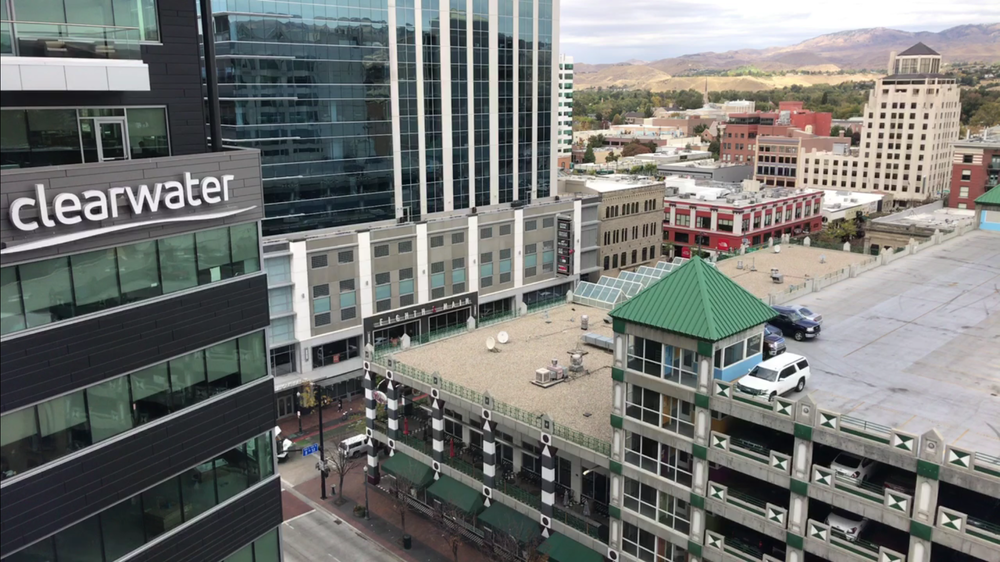 Boise’s Capitol Terrace building was part of the first wave of Downtown Boise urban renewal, built in the 1980s to house both parking and retail.

The building is actually split, with two owners – the garage is owned by the Capital City Development Corporation, and the retail portions are owned by Hawkins Co. after a purchase earlier this year.

The retail building sits at the corner of 8th & Main – which has seen a renaissance in recent years with updates to the Grove Plaza, new Zions Bank building and Clearwater Building. With all the modern updates, Capitol Terrace stands out for its dated appearance.

After very little reinvestment by the prior owner, Hawkins is planning to make some updates to the poured-concrete structure.

If approved by City of Boise’s Design Review board, crews will update the building’s facade with a new beige-grey and bright green color scheme.

The checkered black-and-white tile along storefronts will be given a black-brick texture.

Hawkins also plans a new framing of the main entrance along 8th St. near the escalators.

“We are positioning ourself for future phases, which could include: Additional Parking, Office and/or Residential uses,” according to permits filed with the City of Boise.  The developer owns the right to build on top of the current retail building along 8th Street.

For now, the portion of the building owned by CCDC would remain as is. We’ve reached out to officials with that agency to see what if anything they have planned.

You asked: What is going up near the Fred Meyer on Overland?