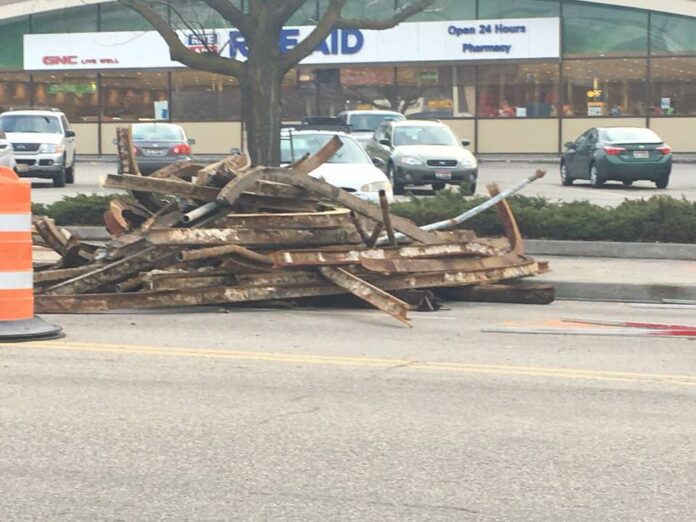 Ada County Highway District crews are doing some roadwork in the area of 16th and State St. in the North End – and unearthed a giant pile of metal beams.

Turns out, according to ACHD spokesperson Nicole Du Bois, the metal is from old trolley tracks that once ran along State Street. The tracks are likely more than 100 years old – part of a trolley system that rolled through downtown Boise in the decades surrounding the turn of the 20th century.

The trolley system around the Downtown Boise core and out State St. and Warm Springs Ave. stretched more than seven miles, according to a paper from Boise State University. The project got going in the 1890s but sputtered to a stop nearly 90 years ago:

May 17, 1928 marked the official end of the trolley era. At 6:00pm the trolleys were taken to the storage barn, the few remaining patrons were given bus schedules, as they had now replaced the trolley line. Sadly, little sorrow from the public accompanied the close of the trolleys. People had long been complaining about poor service, bumpy rides, and unsightly cracked pavement around the tracks. However, for the few that faithfully rode the trolleys, the engineers and conductors who maintained and ran them, it was the end of an era.

The City of Boise hopes to startup its own $100-million trolley system in coming years that would again ride the streets of Downtown Boise. The project is technically approved by Boise City Council, but a funding source has not yet been identified. The city has identified $3.5 million in tax dollars to start work on the project.

ACHD is replacing a bridge over a culvert in the area, and will wrap up work in mid-February.