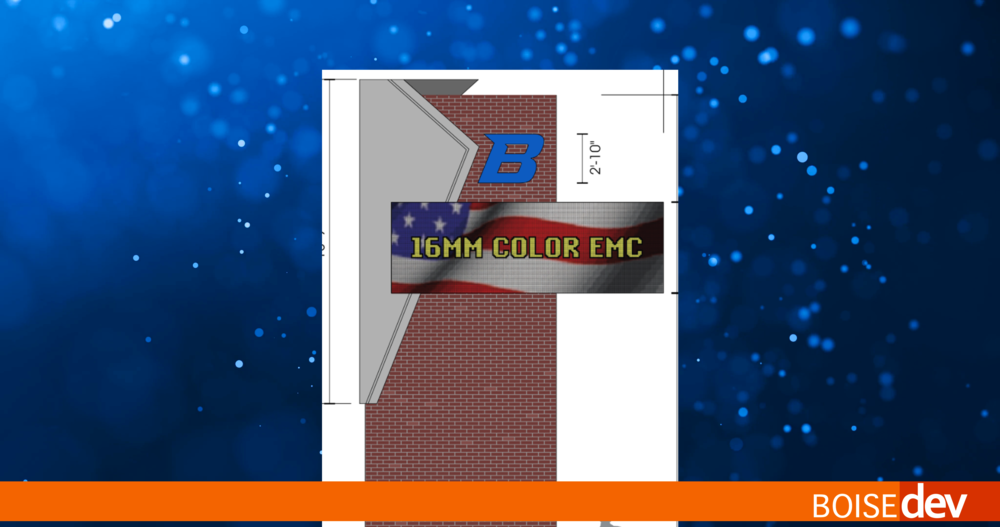 The large reader-board display for Boise State University on Broadway Ave. near the Boise River has seen better days.

The sign still carries a logo replaced by the school in 2012, and has seen its digital reader board turned off since early 2016.

A new, updated sign will feature a more contemporary look, with enhanced digital display board and current branding.

Boise State University Associate Vice President of Communications and Marketing Greg Hahn says the new sign ” is designed to reflect the campus look and feel through the brick pattern, which can be seen across campus, and that silver/aluminum accent from buildings like the student union building and environmental research building.”

The updated sign is proposed to be slightly taller – 30′ 11″ versus the current 26′ structure.  It will be slightly less wide, 17′ 7″ versus 21′ 4″ currently. The inset reader board would also be slightly larger.

Hahn notes the digital board won’t feature video images – just stills – due to its placement on Broadway Ave., which is a state highway.

“We have used it in the past to advertising big events on campus, Morrison Center, Taco Bell, athletics, big days on campus,” he said.

The sign must pass the permitting process with the City of Boise.

The marquee originally had a twin on Capitol Blvd. near the Towers Dorm. Both signs were originally sponsored by First Security Bank which covered installation costs totaling about $160k per sign, according to the Arbiter in 1984.  The Capitol Blvd. sign was removed as part of a push to improve the visual coridoor from the Boise Depot to Idaho Statehouse.

See a photo of the marquee shortly after installation in the Boise State photo archives.

The City of McCall is the latest Idaho government to mandate wearing face coverings in public. The McCall City...
Read more
COVID-19

First-person account: I got COVID in Boise. I’m fine, but here’s what I went through

Editor's note: A few weeks ago, we hired new reporter Autum Robertson. This spring, she contracted COVID-19. We thought her perspective...
Read more

In April of 2019, we told you about the upcoming new Flying Pie Pizzaria location on Overland Rd. in West Boise. ...
Read more

Hailey passes mandatory mask law: one of first Idaho cities to do so

Chalking Boise’s sidewalks wasn’t legal. Now it is… for now

Until today, drawing on the sidewalks with chalk in the City of Boise wasn't legal. But last night, the...
Read more