‘The Bay Area is broken.’

That’s the headline atop a San Jose Mercury News story on the need for affordable talent for companies based in the Silicon Valley area. 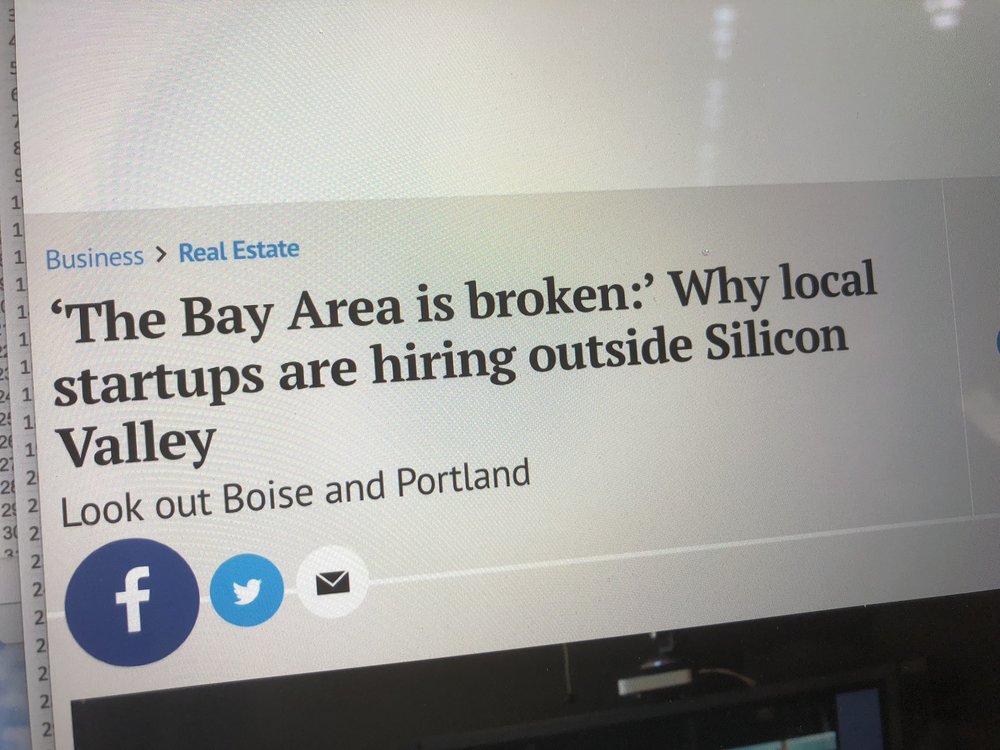 “Silicon Valley may be the world’s tech paradise, but it’s a hiring nightmare for many local startups now forced to venture from Portland to Boise in search of talent.”

The story shows why the immediate future of the greater San Francisco and greater Boise areas are linked.

It is very expensive to live in the Bay Area – and it won’t get better soon.  The cost of land drives housing prices through the roof, and with it the costs of food, goods, services and of course talent.

A job somewhere like Facebook or Google could be appealing to many, but to have a standard of living that compares to one you might find in Boise could easily cost significantly more.

The average cost of living in Palo Alto is 39% higher than in Boise, according to data from PayScale. (A personal data point that can help illustrate this, I have been here since August as part of the John S. Knight Journalism Fellowship at Stanford University – I pay $3,800 for a 2-bedroom cottage near Palo Alto. Per month. For rent.)

Now, companies are finding the Treasure Valley (and other locations like Portland) are ripe for expansion.  The Mercury News looks at Jelli, which opened an office on 8th St. in Boise last year.

The company says the Boise area allowed it to find employees for a third lower than what they pay people doing the same jobs in California.

“As we’ve been looking to hire, we’re running into the same issue that everyone else is running into — in that the Bay Area is broken,” Michael Dougherty, CEO of Jelli told the Mercury-News.

Jelli says it has ten people in Idaho – with plans for another 30 or 40.

“The community’s cool,” Dougherty said. “There’s a lot of really great folks there.”

The influx of jobs can boost the economy, but drive growth faster than leaders or planners expect.

Unemployment in the Boise metro area hit a low of 2.5% in August of last year – the second lowest since 1990 according to non-seasonally adjusted numbers.

The quick growth is causing increased friction between government and citizens in the Capital City.  Groups like Vanishing Boise have grown quickly and are working to organize and mobilize citizens to have a larger voice in the development and planning process.

The City of Boise has responded to frustration by planning town halls and a series of conversations about Boise’s growth.

Leaders will have to balance the demands of private landowners and the need to add housing and services, with an increasingly vocal base of citizens who want to slow growth and preserve the quality of life and cost of living Boise is known for.  The rapid expansion in the tech sector in Silicon Valley in California may soon be strongly linked to the fortunes of the Treasure Valley in Idaho.

On the block: Land Board says it will auction McCall’s Cougar Island