New downtown public park in the works: what do you want to see? 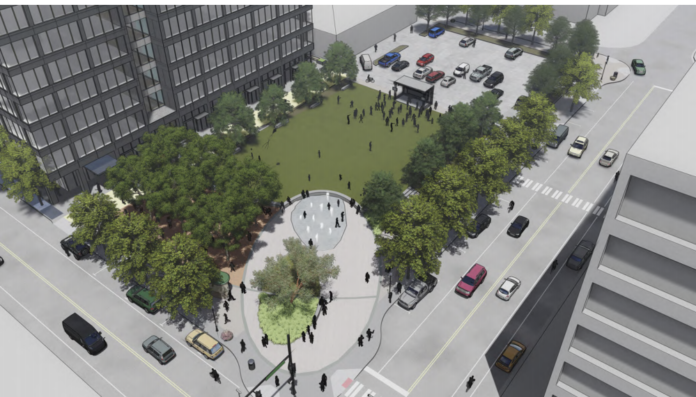 Idaho Press notes the park will be adjacent to a new 10-story office building also being planned for the block between 11th St. and 12th St. on Bannock St.

Here’s some additional detail on the concepts:

This concept would feature an event lawn, plaza area, parking for food trucks, portable stage and more. A movie screen could be brought in for movie nights, and cafe seating would be available for food truck patrons. Event space in this configuration could accommodate as many as 1,500 people. Trees currently on the site would be removed and replaced.

Some sort of “focal feature” that include a water fountain would work to draw folks in from Bannock St. and 11th St. Thirty-two surface parking spots would be retained, and surrounded by a grass berm.

This concept is similar to the first idea, but would orient the event lawn in a diagonal fashion, and would add space for some native plantings. In this layout, 1,200 people could enjoy an outdoor movie or on-stage event.

Three types of “focal features” are being considered – including interactive art, a water feature or a fog/mist feature. Planners want the feature to be “iconic, interactive, unique and playful.”

You can make your vote here.

A Boise City Council workshop is set for June 19th at Boise City Hall. Approval could come this summer, with construction slated for spring of 2019.