Have you ever been to the downtown Boise Public Library and felt a bit like you were inside an old warehouse?

That’s because… you were. 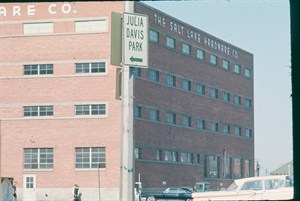 The library branch when it was Salt Lake Hardware Co. Photo courtesy City of Boise

The City of Boise moved library services to the former Salt Lake Hardware Co. warehouse on Capitol Blvd. and Battery St. (now River St.) in 1973.  It replaced Boise’s original Carnegie Library on Washington St. and has stood pretty much unchanged for the last 45 years or so.

Now Boise City leaders hope to raise that old warehouse and build a new library, arts and history campus on the site, facing the Boise River.

“We want a facility that connects the community,” library director Kevin Booe said. “We want a place where people will come and do lots of different things.”

The project, if approved and funded, would completely revamp the current site of the library, with the old hardware warehouse tumbling down, and a new complex rising up in its place.

City and library officials contracted with Safdie architects, which has designed libraries in Vancouver, British Columbia, Canda and Salt Lake City, Utah.  For Boise, the firm has turned in initial designs that are geared toward the Boise River and Greenbelt.

“We want a building that engages with the river,” Booe said. “You can’t even see the river from the (current) library. This concept faces the river. We would like a space where the indoors and the outdoors merge and it’s almost transparent.”

That comes in the form of a large wall oriented south.

“(It features) a glass wall, they call it a lens,” City of Boise Capital Projects Manager Shawn Wilson said. “This is (Safdie’s) concept of how they are going to interface with the river and the riparian area of the Greenbelt. It provides a place to sit and watch – or sit and read.” 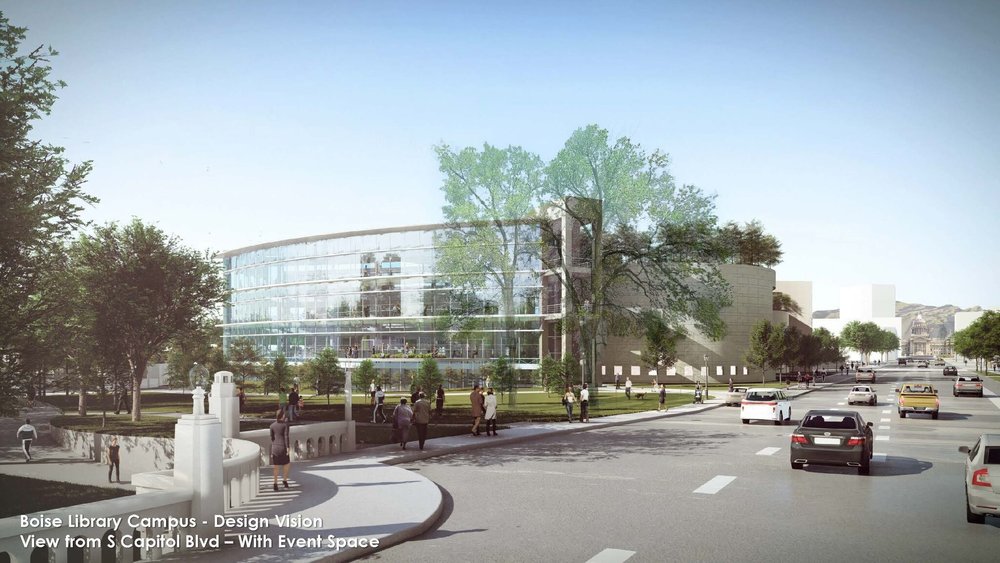 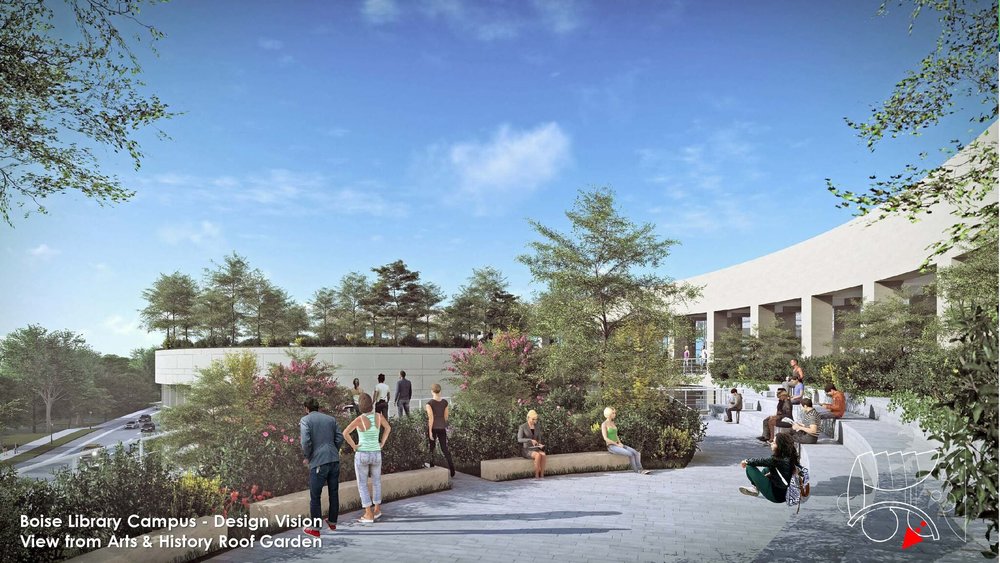 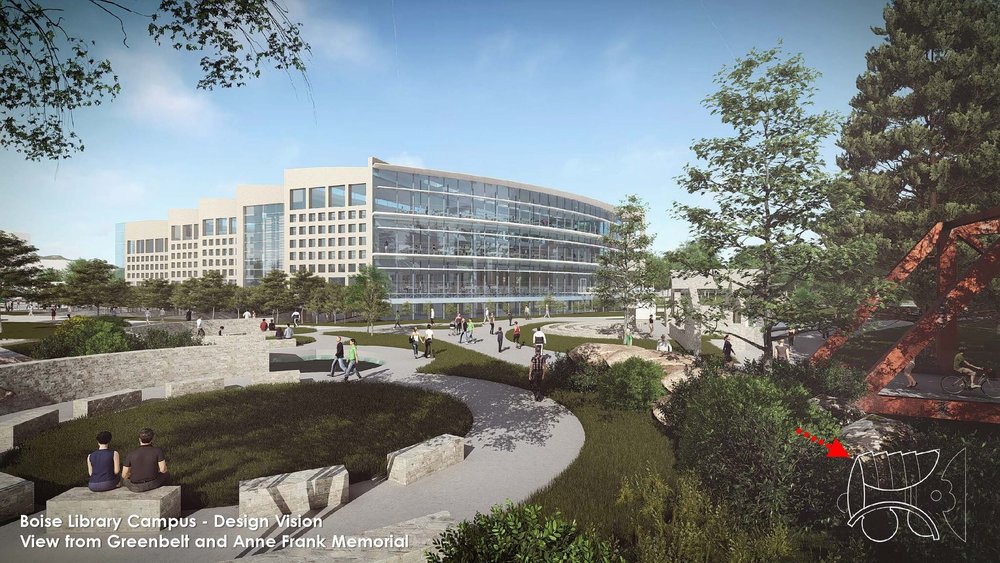 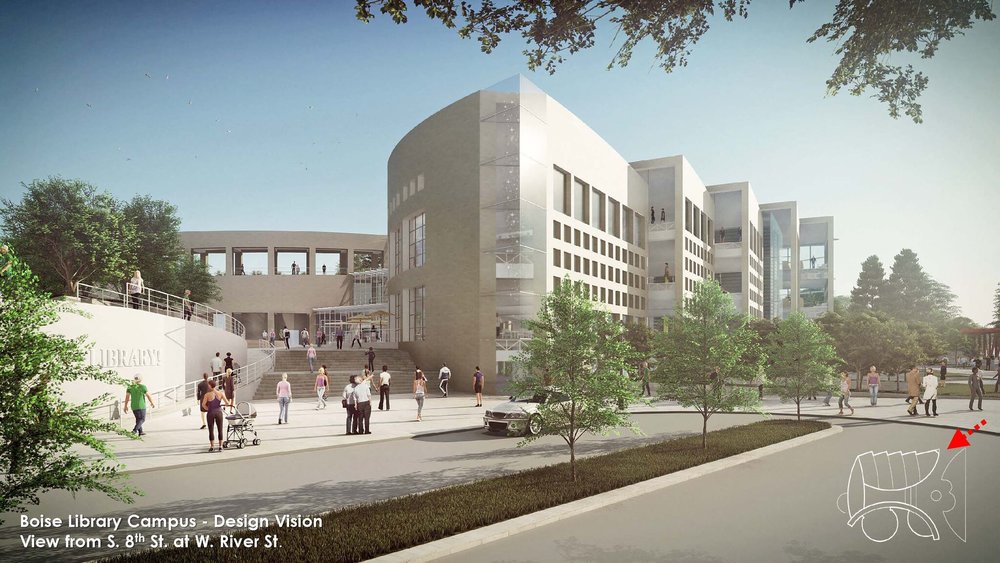 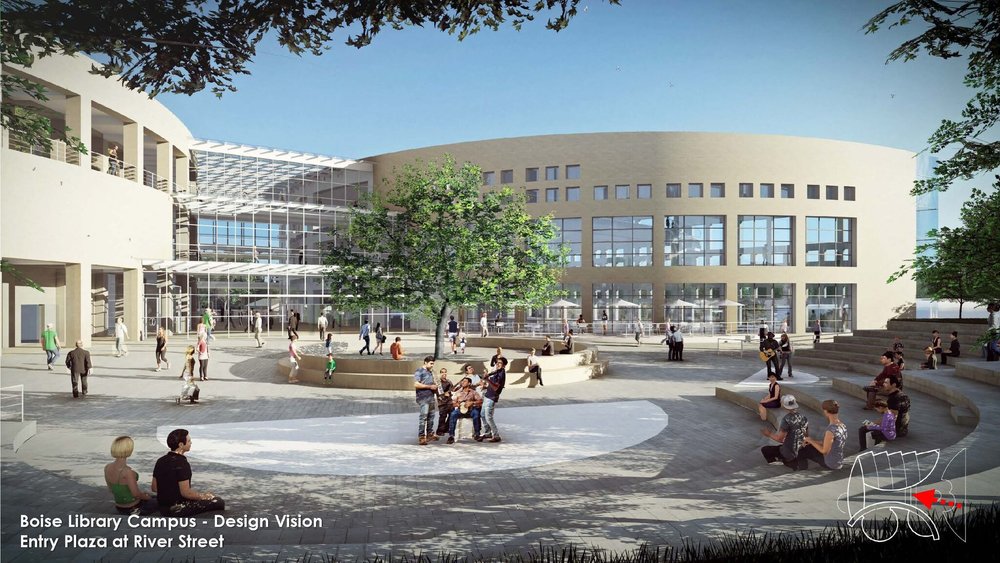 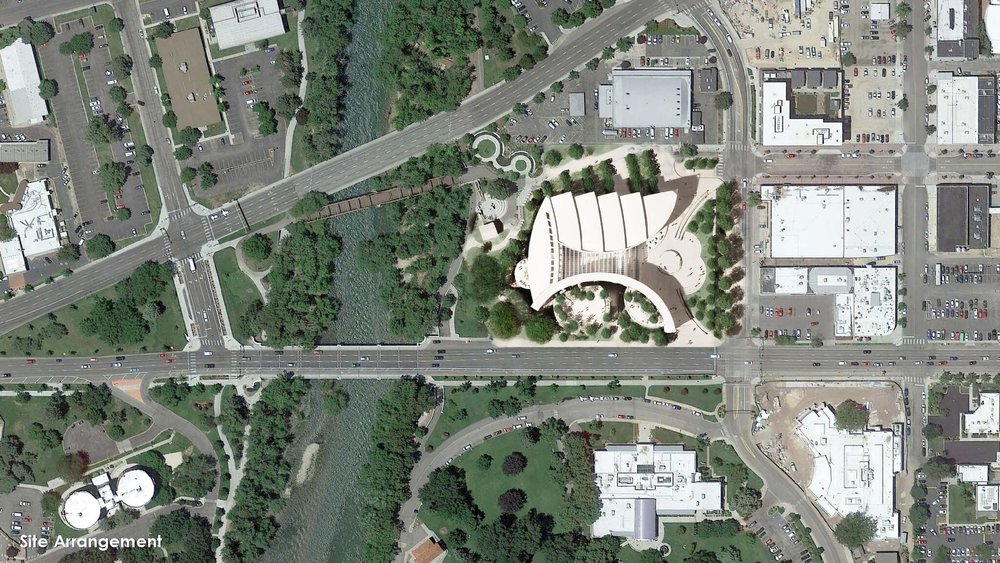 The project is envisioned to cost $80-$85 million, and would come from three sources: 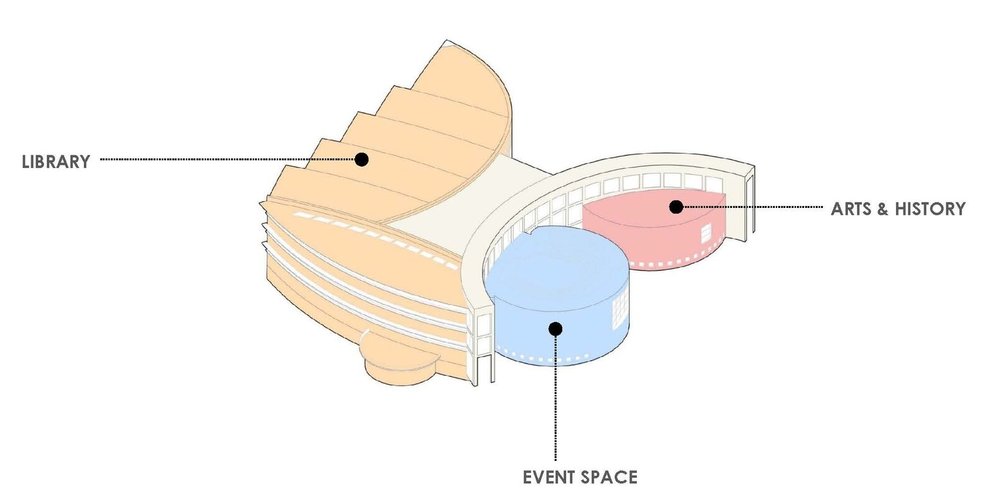 Retail spaces for a gift shop, cafe and other library and arts-related concepts are also envisioned.

Two rooftop gardens are part of the current plan – one on top of the events space, and another on the arts & history section of the complex. 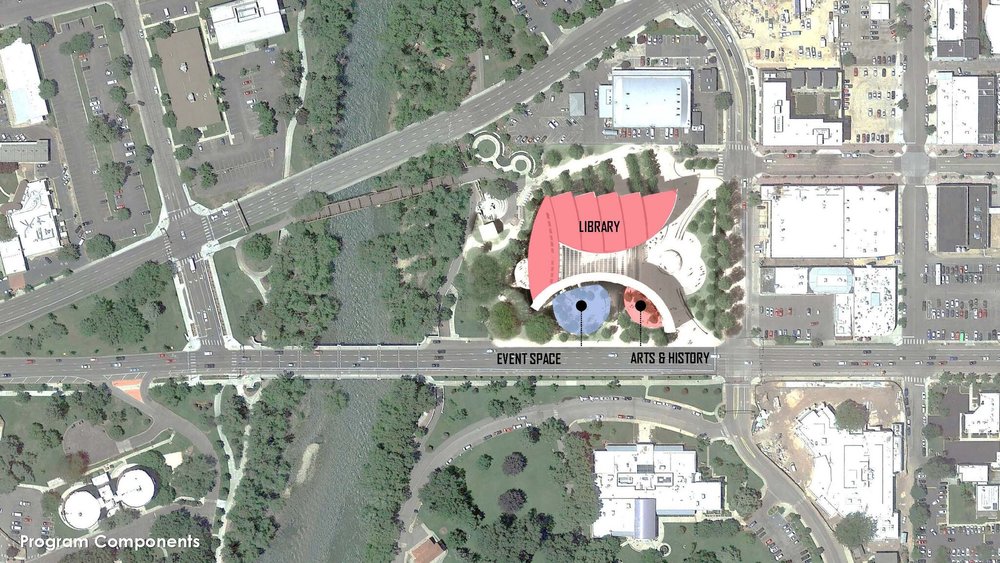 Library would bulk up, expand

Right now, the Boise Public Library has about 350,000 items in its collection. Booe says he would like to see that grow to the million item mark, similar to cities like Salt Lake City, Utah and Des Moines, Iowa.

That would be accomplished with an automated storage retrieval system – a robot-like device that can snag items from a vault and deliver them in under five minutes.

More from Don:
How to solve the local news crisis? Look it up in the library

Arts & History to get dedicated space

The City of Boise Department of Arts & History currently works out of a cramped space inside City Hall.  By moving down the street to the library site, it would be able to do more and give the public more access to its archives and programs.

Arts & History director Teri Schorzman says the Sesqui-shop on Main Street during Boise’s sesquicentennial in 2013 was a test run for the concept.

“(The Sesqui-shop) was focused on local art and local history,” she said. “That’s the goal for what we do in this space where we can continue that kind of programming.”

One historic item may go by the wayside, however. The plans currently show The Cabin being removed to make way for the new campus.

“The  Cabin may move,” Outreach and Education Coordinator Jennifer Yribar said. “We are working with the Cabin’s Executive Director and Board to find a sustainable solution for the organization that will allow the Cabin to maintain  their physical identity with minimal disruption to programs and services.”

A new place for events Downtown

The city says its research shows there is a need for an events space in the Downtown core with room for 300-400 patrons. It would contrast with the Velma V. Morrison Center for the Performing Arts which seats about 2,000 guests and the Egyptian Theater which seats about 760 people.

This “black box” style theater would include a stage, dressing rooms, VIP rooms, concessions, offices, technical areas and more.  It could be used for a variety of community and smaller-scale events and could complement Jack’s Urban Meeting Place and facilities at the Boise Centre.

Existing library to be torn down

The old warehouse would be torn down if the current plan is followed. The library wouldn’t close however, with two options being discussed.

“We could stay in the current four-story building while the library part of the campus is built,” Booe said “then tear down the old building and complete the rest of the project.”

Booe said the other idea is to relocate the library to another location downtown temporarily.

“We are looking at an analysis on the cost of that,” he said. “Trustees and staff are adamant that the library continues to stay open, even if it is with a diminished service.”

In addition to the library, the parking structure could use funds from the Capital City Development Corporation to provide patrons of the library and other nearby properties parking.

“Our current parking lot is 102 spaces,” Booe said. “The biggest complaint we get is, ‘you don’t have enough parking.’ Like it or not, people drive.  You need between 200-300 parking spaces. So that’s what we are planning to do.”

“That part of town could use a little help in that sense, and that goes beyond the library,” City of Boise Director of Communications Mike Journee said, citing events across the street in Julia Davis Park, the new Idaho State Museum and growing activity in the River St. area.

CCDC is working to sell its garage under the Grove Hotel to raise some of the funds needed for the library garage project, as BoiseDev reported this spring.

UPDATE: Boise City Council was given an update on the project today during budget workshops

From there, it will go out to citizens for a series of public workshops. The tentative schedule

Another series is also planned for September after revisions are made based upon feedback collected next month.

“There may be some changes as we go along,” Booe said. “We know we are going to have to do a lot of value engineering, and after we go through the concept, feedback with the public – we might have to make some changes based upon public feedback.”

That value engineering is important – because the current concepts are estimated to cost well over $100 million.  The plans will have to be downsized to fit in the $80 to $85 million budget.

“This is and was community built,” Yribar said. “It’s the culmination of so much community visioning. We are going to council tomorrow to make sure we are going in the right direction to keep going, but really we are going to the public to get their reaction.”

If a design can be finalized and funding secured, groundbreaking could happen as early as Fall 2019. If all goes as planned, the new facility could be open as early December 31, 2021.

Even with a flurry of changes – one thing will stay the same. That famous exclamation point after the word library will continue on (!)