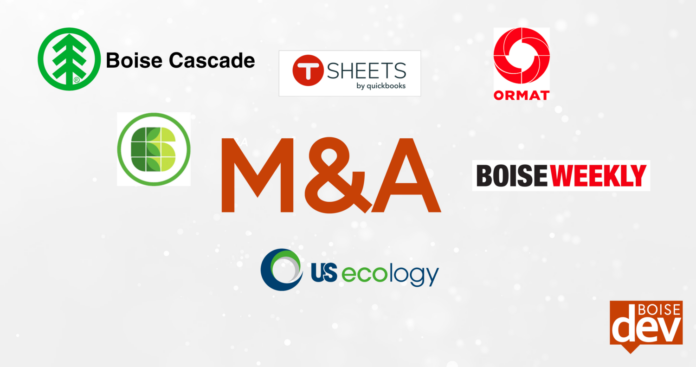 The 2018 Deal Flow report outlines a total of 70 mergers and acquisitions – with an Idaho-based company either buying another firm, or being acquired.

Here are a few highlights. The full Deal Flow report details all the mergers & acquisitions.

Intuit purchased TSheets in January for an eye-popping $340 million. The business remains based in Eagle and saw a rebrand as TSheets by Quickbooks. It continues to add Idaho-based employees.

US Ecology, founded in 1952, provides services around environmental, field and industry to commercial and government entities in North America.

In August, US Ecology bought ES&H of Dallas for $22 million. Then in November, it bought EcoServ LLC for $87.2 million.

US Geothermal purchased by Ormat Nevada

Boise-based US Geothermal focuses on development, production and sale of elecricity derived from geothermal energy. It operates three plants across the US. Ormat Nevada entered into an agreement to purchase the company in January of 2018 for $110 million.

In April, it bought Lumberman’s Wholesale Distributors. That company distributes engineered wood products, commodity lumber items, and specialty building materials. The companies did not disclose terms of the deal.

In September, it purchased Arling Lumber of Cincinnati. Arling distributes lumber, plywood and other wood products. Terms also remained private for this deal.

In August, Virgina-based Adams Publishing bought Boise Weekly. It operates as a division of Idaho Press. The parties did not disclose the purchase price, but the Deal Flow report notes the acquisition came via a leveraged buyout.

Sewer, houses, annexation, and a huge undeveloped park: 400 log on to hear about city’s...