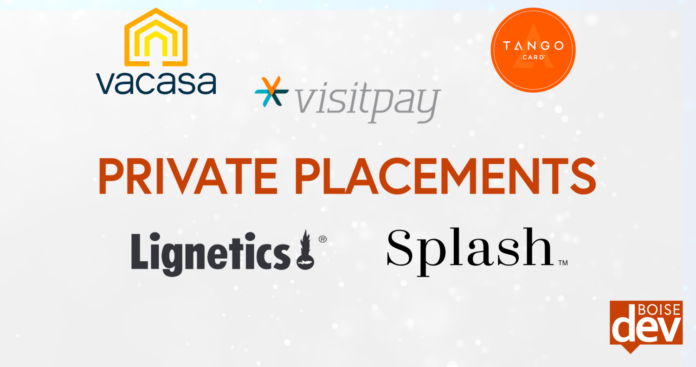 Here’s a look at a few private placement highlights. All of the companies are detailed in the full Idaho Deal Flow report.

The provider of vacation rental management services shared its home base between Portland, OR where it was founded in 2009, and Boise’s One Capital Center.

In October, Vacasa closed a $64 million dollar round led by Riverwood Capital. The investment round is the largest private placement listed in the 2018 report.

Now known as VisitPay, iVinci is based in Boise and provides healthcare payment platform solutions. As of January 3 of this year, it raised $8.150 million through private placement in a funding round that started on December 21 of 2018. Seven investors took part according to the Deal Flow report.

The Kootenai, ID-based company makes wood pellets and firelogs for home heating. The products are made from recycled sawdust and are 100% renewable according to the company. The company has 13 plants across the country and is the largest player in its space in the US. Brands include New England Wood Pellet, Golden Fire and Wam Front.

This Boise-based company makes a platform for digital rewards for employees, customer loyalty, wellness and more. David Leeds founded the company in 2009 and serves as CEO.

The company landed $35 million in funding for a Series C round in May. FTV Capital provided the funding.

Eagle-based Splash Wines is an ecommerce play for wine. The membership-based program ships bottles direct to people’s homes. Robert Imeson founded the business in Eagle in 2014.

During 2018, Splash saw two investments according to the Deal Flow report. In May, it raised $582,250 of Series A angel funding from an undisclosed investor. In December, another $113,000 came in the doors as part of a $500,000 private placement announced in March.

With growth & federal funds, City of Boise will add a dozen new positions