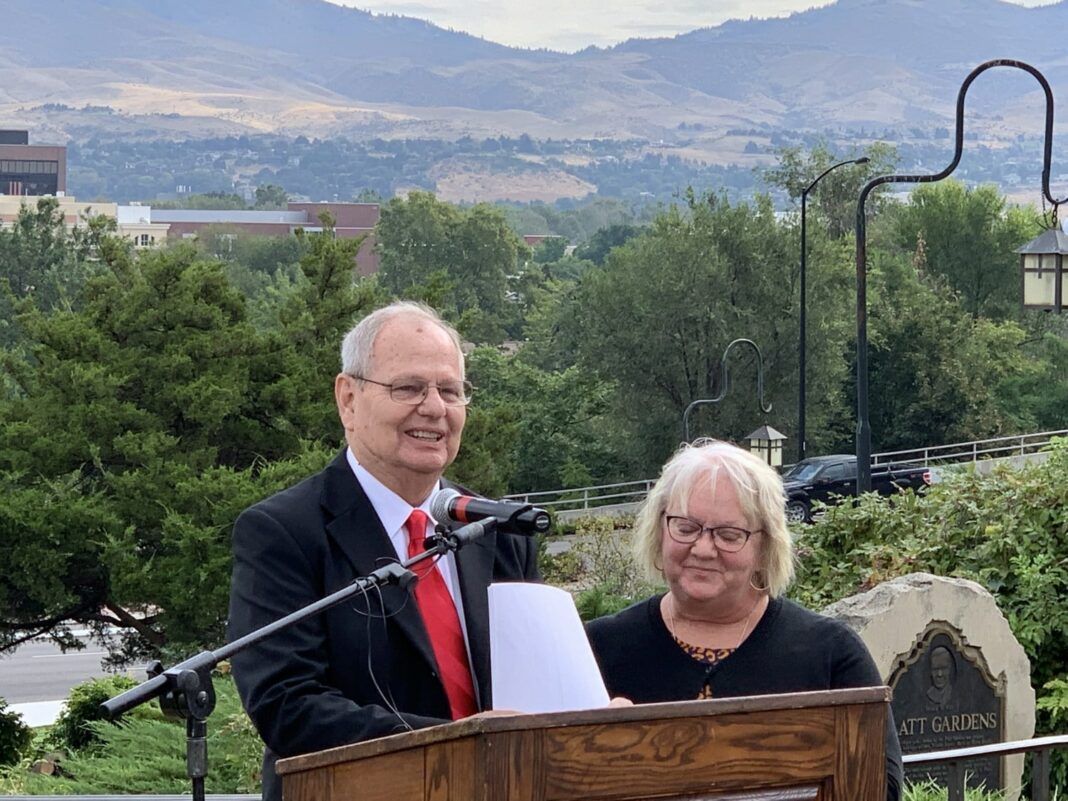 “My name is Brent Coles, and I’m running for the office of mayor in the City of Boise Idaho.”

Coles resigned from his position in 2003 amidst a scandal over spending and other practices at city hall. An Ada County Grand Jury indicted Coles on five felony counts related to a trip paid for by an insurance company to the 2002 Olympics in Salt Lake City, UT.

The former mayor also admitted submitting falsified reimbursement records to the city for tickets to a Broadway show in New York City.

Before the scandal, Coles served three terms as mayor and spearheaded initiatives still in place in Boise today – including expanding parks, expanding the city’s neighborhood association program and adding youth to city commissions.

[Boise still has a runoff system for the mayor’s seat]

Coles opened his speech by talking about the scandal and admitting his role.

“I want to apologize to my family. To my wife. For putting them through some very tough times. I also apologize to the people of Boise,” Coles said.

“Growing up in Boise, all I wanted to do was have an influence on the City of Boise.”

Coles, a former developer, said he was opposed to the policies of developers who helped to hurt the Downtown Boise area. He said his policies led to the rebirth of the city’s central core.

“Now today, we see a policy to tear down buildings along Capitol Blvd.,” referring to the library project – including The Cabin literary center. “They want to build a big hundred million dollar facility and replace our heritage with that.”

He called out the current administration.

“What are they doing spending $11 million dollars on a set of plans,” referring to the city’s contract with Safdie Architects. “Who approved that $11 million expenditure? Where else could we spend that money?”

Coles, a Republican, said the current administration’s “tax and spend policies” are increasing the cost of living and “causes homelessness.”

“They have to sell their homes, in part because of the increase of property values and the city taking its three percent and to get a big increase in revenue – and spending $600,000 to see if we can put a light rail in Downtown Boise.”

He also talked about adding buses to the streets, and funding a free bus system. He said the city should freeze its budget at 2018 levels, and put a halt to the creation of new urban renewal districts.

“Voters will be skeptical. But I’ve learned hard lessons. It’s a lesson that is ingrained in my soul.”

Coles has increased his public profile in recent months, testifying on a variety of issues at city hall, including the library project and the Prominence development in NW Boise.

Shortly after Coles’ announcement, Rebecca Arnold, the current president of the Ada County Highway District filed to run. BoiseDev caught Arnold at City Hall – she would not answer questions, except to say:

“I didn’t see a good, strong non-Bieter person. So. We need one.”

Arnold hinted at running earlier this summer. Arnold opted to pay the $40 fee to enter the race instead of collecting signatures from five qualified city electors. Courtney Nielsen also paid the fee in lieu of signatures. McLean, Bieter, Richey and Martinez all turned in their filings with signatures.

BoiseDev asked both the McLean and Bieter campaigns for reaction to Coles & Arnold’s entry into the race.

“In light of today’s news I want to be clear: my mission remains unchanged,” McLean said. “I’m working to earn a majority of Boiseans’ votes, whether that be in November or in a December run-off. I’ve spent my whole career helping people engage with their elected leaders and I treasure our democratic process, full stop. My focus is moving beyond the same old tired grudges and politics of the past, listening to what people need NOW, and working on a bold new Boise future that includes everyone.”

“Not many people remember where Boise was before Mayor Bieter took office,” the statement said. “City Hall was in ruins. A disgraced mayor left as a criminal and Boiseans had little trust in their government. Under Mayor Bieter’s leadership, we’ve moved past those times and made amazing progress as a city. By every measure, we are safer, cleaner, more prosperous, and more caring than we have ever been.”

The race for Boise mayor: On the eve of election day, here’s the story of the race

You Asked: What’s going up in the parking lot of the Riverside Hotel?

Mother of man shot by Boise Police in October files claim for $500,000 with City of Boise