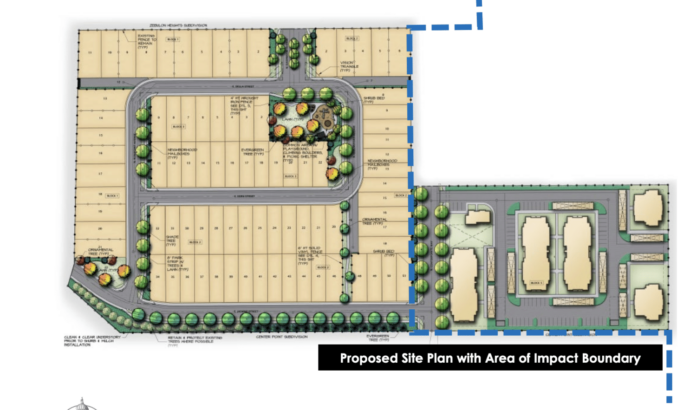 Plans for a 19-acre, 181-unit townhouse and apartment development on the border between Meridian and Boise have sparked outrage from neighbors and criticism from the Meridian City Council, which voted Nov. 12 to send the developer’s plans back to the city’s planning and zoning commission.

About a dozen people testified at the Nov. 12 public hearing, when two or three supporters spoke in favor of the development. Those opposed said they were against a project they believed would bring high-density housing and increased traffic to their low-density neighborhood. Eighty-two neighbors of the proposed project submitted written testimony, primarily requesting the city deny the Delano plans, said Sonya Allen, associate city planner, at the public hearing.

The development, Delano, is an infill project that would provide higher-density housing that is “desperately needed” in the area, said Hethe Clark, a real estate attorney and representative for the applicant, DevCo Development. A preliminary plat proposal for Delano includes 85 townhouses and 96 apartments.

“There’s a huge demand for this that is not being met,” Clark said.

DevCo, a Boise-based real estate developer with ties to a prominent development firm, The Conger Group, previously submitted requests for annexation, zoning, a preliminary plat and a city comprehensive plan map amendment — to include the land within Meridian’s area of impact — to build the Delano subdivision on about 19 acres near the intersection of North Eagle and West Ustick roads.

That was the only one of DevCo’s requests to receive a favorable response last week.

After a lengthy and contentious public hearing, the council decided to send the annexation, zoning and plat requests back to Meridian’s Planning and Zoning Commission for a second review.

“A remand with a redesign is like a whole new application,” said Mayor Tammy de Weerd at the city council meeting. “And it is a lot of work.”

The commission had reviewed the developer’s requests in July and recommended the city council deny the application unless DevCo addressed the area-of-impact issue with Boise, which was resolved Oct. 8, as well as neighbors’ concerns about density — which Clark told the council DevCo did in several neighborhood meetings.

Neighbors who spoke out Nov. 12 said they oppose the development due to its high density in a neighborhood of mostly single-family homes and the increased traffic they fear it would bring, especially within Alpine Pointe, a low-density neighborhood to the north. More than 240 Alpine Pointe residents signed a letter opposing the Delano application, according to Malissa Bernard, a representative of Alpine Pointe’s homeowners association.

Bernard told the city council Delano is one of several planned infill developments that will bring high-density housing to 35 acres south of her neighborhood.

“This application is just part of the problem that’s coming to us in the future,” she said.

DevCo plans to open North Dashwood Place, a public street that currently ends in a cul-de-sac, to connect the Alpine Pointe and Delano neighborhoods and allow Delano residents to access the future subdivision from West Wainwright Drive north of Alpine Pointe, according to the plans.

“Not only is this application going to bring future traffic — it’s also going to stress Wainwright, as people try to seek a way east-west, north-south,” Bernard said. “It seems like our neighborhood is bearing the brunt of some poor planning because we’re the ones that are primarily going to be carrying most of the traffic.”

Clark pointed to an informal traffic analysis by the Ada County Highway District that showed Dashwood would be less than 50% traffic capacity when Delano construction is completed and the homes are occupied.

In a 3-2 vote, the council decided DevCo should further address density issues, such as revising its plans along the project’s northern border, where lot sizes could be widened so they’re similar in size and density to Alpine Pointe’s. The council’s decision did not address neighbors’ concerns about Dashwood becoming a through street.

“I think this is a great project, but I don’t think it’s in the right spot,” Borton said. “It would invite a long-term, perhaps generational, problem to the north.”

A date for the application to return to the Planning and Zoning Commission has not been set. It likely will be re-introduced in the next two months, Meridian City Clerk Chris Johnson said Monday.

Ryan Suppehttps://www.idahopress.com/users/profile/ryansuppe/
Ryan Suppe is a reporter for Meridian Press, Kuna-Melba News and The Idaho Press. Follow him on twitter, @salsuppe.
BoiseDev Sponsor

"Men pee free, why can't we?" Marjorie Ewing lived in Idaho most of her 98 years, and in Boise...
Read more

‘Boise is Back:’ Tourism team works on plan to attract (some) travelers

Tourism in Idaho is big business. In 2017, folks traveling in the Gem State spent $3.7 billion dollars. But when COVID-19...
Read more

Going up: Dawson’s Downtown reopens with a new look

A new project that added a large new parking structure to 6th St. at Front St. is done, and the garage is...
Read more