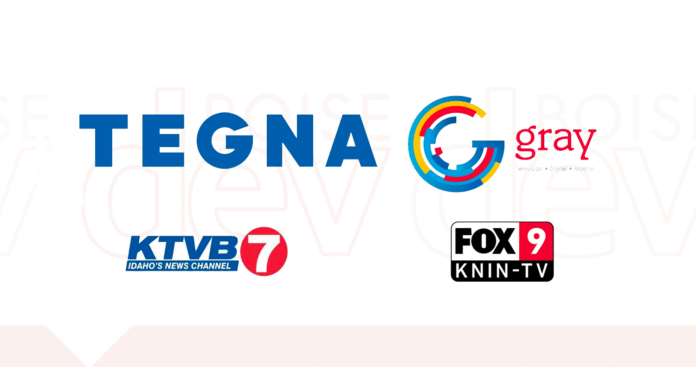 Gray Television is actually the smaller of the two companies based on revenue. The $8.5 billion bid would bring together two of the nation’s largest owners of television stations.

Neither company would comment to Reuters on its report, but shares of TEGNA shot up on the news.

If the two ink a deal, it would need to pass reviews by both the Department of Justice and Federal Communications Commission. Past reviews have generally prohibited any one company owning two of the top four television stations in a market. If the same standard applied to a potential Gray and TEGNA merger, it would make it unlikely KTVB and Fox 9 ended up with the same ownership. It also may make it less likely for KMVT and KTFT to end up co-owned.

Broadcasters, including TEGNA’s CEO, have argued that the standard is unfair, as TV stations compete not only amongst themselves but with large national players like Facebook and Google.

Gray currently operates Fox 9 out of the studios of KIVI-TV, owned by a third company – Scripps. It also employs a licensing agreement for newscasts produced by KIVI.

TEGNA, which spun off its newspaper division and took on a new name in 2015, owns 62 television stations in 51 markets across the US. Gray operates in 93 markets.

What a year of growth at BoiseDev. Just a year ago, our site was a solo effort. Today, I'm excited...
Read more
COVID-19

I Wonder: What’s up with Centennial license plates… 31 years later?