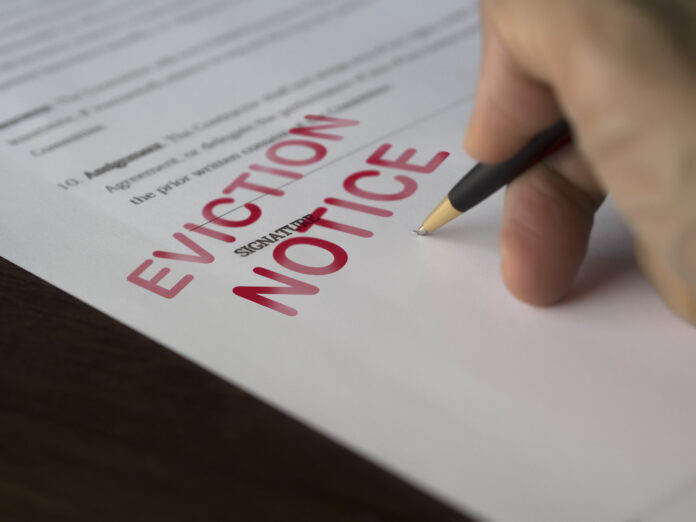 Roughly 1,600 Idahoans were formally evicted from their homes in 2019, according to a new study from Boise State University’s Idaho Policy Institute.

By analyzing court records from the Idaho Supreme Court, researchers were able to determine 2,673 of Idaho’s 190,031 renters received an eviction filing last year statewide. Of those, 1,611 were removed from their homes after going through eviction court proceedings.

The statewide eviction rate for the year was 1.4%, which translates to 4.4 evictions per day. Click here for the interactive map.

Eviction data in Idaho has been historically difficult to track due to the designation of the filings in the state’s court system as compared to more transparent data collection available in other states. There has been some data available through The Eviction Lab at Princeton University, but the latest data available is for 2016.

“Our hope is for policy makers to better understand the extent of evictions in their communities,” Ben Larsen, an IPI Research Associate, said. “This data is important because it provides a baseline for future research on evictions in Idaho. Our plan is to replicate this study in coming years to provide policy makers with information about how the pandemic and various state and federal eviction moratoriums affect eviction rates statewide.”

BoiseDev FIRST members made this story possible. If you aren’t already a member, sign up now to get our daily scoop sheet in your inbox, and help support independent journalism in Boise.

Evictions can either be for non-payment of rent, or “for cause” for issues of property damage, criminal activity or other disputes with a landlord. They are closely tracked by advocates for low-income Americans because an eviction on someone’s record makes it extremely difficult for a renter to find another place to live and can impose high fees and possibly result in suits in small claims court from the landlords.

An eviction filing is when a landlord submits paperwork to the court system to begin the process of having a tenant removed from their home, but they do not qualify as a formal eviction unless they are ordered to leave and pay damages by the court system. Informal evictions, which are not studied in this research, are when a tenant voluntarily chooses to leave under threat of an eviction either before paperwork is filed or before their court date to avoid the extra legal fees and potential wage garnishment.

The state of evictions in the Treasure Valley

Ada County had a 1.5% eviction filing rate in 2019, with .62% of the county’s renters ultimately being formally removed from their homes. A total of 802 households received a filing and 330 being removed by the court. Some people in the count could have been evicted multiple times.

In neighboring Canyon County, a higher rate of renters were given eviction notices or removed from their homes. The filing rate was 1.98%, and the rate of removal was 1.19%, which is equivalent to 446 and 269 households respectively. The rate is higher than Ada County’s despite the smaller numbers because a higher percentage of renters in the smaller county received notices.

Ali Rabe, executive director for eviction nonprofit Jesse Tree, said one factor at play is the difference between services in Ada County and Canyon County. She said there are more nonprofits and assistance programs available to intervene between a filing and a court date to help get renters current on their bills, but she also said mediation plays a big part.

Ada County is one of the few court systems in the state with eviction court mediation services available to help renters and landlords come to an agreement about payment, damages, move out dates and other details. Without that in Canyon County, Rabe said her employees had been trying to strike deals with landlords on behalf of their clients in the hallways of the courthouse.

“It’s good to have mediation in court even if we’re doing precourt work because a lot of landlords and property management companies are just by the book and file for eviction without trying to talk to the tenant and come up with an agreement before court so having it there is so helpful,” Rabe said.

In the fiscal year 2021 budget, Canyon County decided to dedicate some CARES Act funding to pay for someone to start an eviction court mediation program. The position has not been hired for and is on hold for now, but Canyon County spokesman Joe Decker said county officials are optimistic the program will see positive results when it begins.

To head off evictions before filings hit court, Jesse Tree is pulling eviction filings every week and trying to contact landlords and tenants directly to see if they will accept mediation and possibly rental assistance to get the case resolved. She said with this method the nonprofit has been able to get a number of cases resolved they wouldn’t have otherwise.

However, Rabe said her organization’s request to have their information provided directly to landlords and tenants after an eviction was filed was denied by the court because her group is not neutral.

“We’re not able to get information about evictions happening week by week and had to go so far by going to the courthouse to pull public records every single week to get the information we need,” she said. “It is very opaque. They are very reluctant to share that information and it should be public information people can see and look at in real time.”

There is a lot of media attention on the Treasure Valley’s affordable housing crisis, but other parts of the state are feeling the crunch too.

Idaho Policy Institute’s research found Bannock County, where Pocatello is located, had the highest eviction rate in the state. 238 households in the county received eviction filings in 2019, for an overall rate of 2.43%. The formal eviction rate was 1.82%.

BJ Stensland, the executive director for Pocatello’s homelessness assistance program and shelter Aid for Friends, said the area has been plagued with low inventory for affordable housing in recent years. According to Census estimates, Bannock County has a 17% poverty rate.

“It’s very hard for our clients to find affordable housing, landlords who will accept them and if they do find a place, the landlords is at an advantage because the market place is in such a high demand for housing they will go through an eviction if they don’t pay rent right away,” Stensland said.

The Idaho Senate passed legislation requiring minor restrictions on rental fees, but only after a major part of the bill...
Read more
Affordable Housing

Pick up something tasty from one of the many local restaurants listed in the takeout and delivery guide.