Work to start on another new Albertsons store 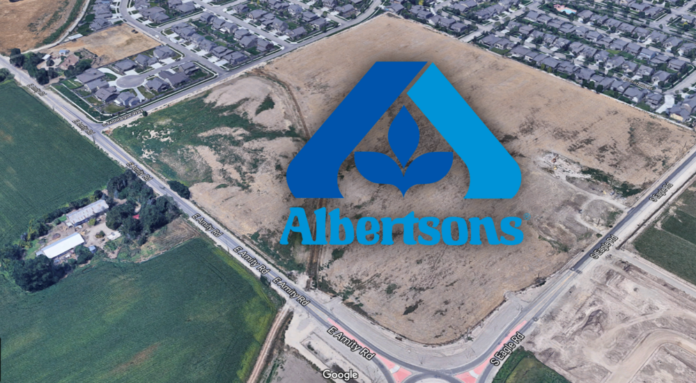 Work will soon start on another new Albertsons store in the Treasure Valley.

BoiseDev started tracking three new store locations proposed – one in Boise’s Barber Valley, another on State St. in Star, and a third at Amity Rd. and Eagle Rd. in South Meridian.

Now, with work underway on the Star store, the company says it will start efforts to get the new Meridian store up and running.

We first told you about the project three years ago. The City of Meridian annexed the large site several years ago, and it will include single-family homes and other retail uses.

[Will the long-delayed Overland Rd. Meridian WinCo happen? A proposed apartment complex may give a clue]

The permit for the project expired, so Albertsons officials applied earlier this month for a new permit.

“We have store plans finalized and are just waiting for permits to be approved so that we can move forward and break ground on the new store,” Albertsons spokesperson Kathy Holland said. “We are anxious and excited to be a part of the community in that area.”

The permit calls for a 58,000 square foot store on the site, valued at $12.5 million. The building would face Eagle Rd., and include a pharmacy drive-up lane. The site plan also calls for an Albertsons Express fuel center, though the company has not yet filed a building permit for that part of the project.

Albertsons currently operates 25 store locations in the Treasure Valley from Ontario to Mountain Home, including three in Meridian.

The third local store working its way through the process is a smaller location planned at the westernmost intersection of ParkCenter Blvd. and Warm Springs Ave. (the roads intersect twice). The City of Boise approved that store in 2017.

In June of 2019, a development rep for the grocer asked for a two-year time extension due to “many factors, including construction costs.” The city granted the request. That extension will expire this summer if not again renewed.

You Asked: Why can’t some Boise residents vote in the city’s sewer bond election?

Tamarack hopes to open for Thanksgiving, announces upgrades for 2021-22 season