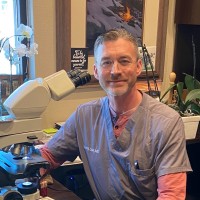 On Tuesday, the Ada County Commissioners voted 2-1 to forward the Garden City-based pathologist to the rest of the county commissioners in the Central District Health area for approval. If he earns the vote of five of the nine remaining commissioners from Boise, Valley and Elmore counties, Cole will be appointed to the seat.

Cole drew criticism from members of the healthcare for his comments on the COVID-19 vaccine, calling it a “fake vaccine” and referring to it as “needle rape” at a conference in Texas last month. He has also been promoting using anti-parasitic drug ivermectin to treat and prevent COVID-19, according to his Facebook page viewed by BoiseDev, which is against the guidance of federal health officials.

After changes to state code in the 2021 legislative session, any health order passed by Central District Health will be advisory and still need the county commissioner’s approval.

Beck: ‘Medicine is an inexact science’

Commissioner Ryan Davidson and Board Chair Rod Beck said they supported Cole because of his “outsider” perspective, a willingness to question the status quo and search for new solutions to the pandemic.

They noted that of the thousands of emails received during the public input process, the majority were in favor of Cole. Conservative groups, like the Ada County Republicans and the Idaho Liberty Dogs, encouraged people to write in against the epidemiologist Dr. Sky Blue. Blue was the favorite of the majority of the mainstream medical community, according to BoiseDev’s review of records released by the county.

Davidson noted that Cole was one of the few doctors mentioning “alternatives” to getting vaccinated for COVID-19.

“Since the pandemic started, we’ve gotten the same message from the federal government of ‘mask, social distance and vaccines’,” he said. “Even with that, our vaccine rates have maxed out at 60% in Idaho. Having another doctor bringing the exact same message I don’t think is necessarily going to increase rates. If you have people who are dead set against getting the vaccine, we need to provide them with information about how to protect themselves without using force and coercion.”

Leading up to the vote, Beck told a personal story about a time when his five-year-old son was ill many years ago. He said after a health scare, the doctor conducted a number of tests to rule out various serious illnesses but ultimately wasn’t able to determine what was making his son sick. Beck said he was impressed with the doctor’s willingness to tell him he didn’t know the cause of the illness, but he would try and treat Beck’s son anyway. He healed and is now grown with his own children.

“My point is, medicine is an inexact science and I’ve always appreciated when a doctor will level with you and say ‘I don’t know, but I will try everything possible to find out and that’s what this doctor did’,” Beck said, concluding his story. “That’s part of the reason why I support Dr. Cole.”

Kenyon votes no on Cole

Democrat Commissioner Kendra Keyon was the lone vote against Cole’s appointment, saying she was “adamantly opposed” to selecting him. She preferred Blue, or her proposed compromise to appoint retired orthopedic surgeon Dr. Stanley Moss under the requirement he had to consult with Cole and Blue on matters related to the pandemic. Davidson said her proposition garnered very little support in the emails from the public collected since last week.

Kenyon said Cole’s remarks on COVID-19 vaccinations “fly in the face of ethics.” She had hoped for a second round of interviews with all of the candidates, but since Cole was unavailable on Monday that did not occur.

“Numerous doctors have weighed in and said Blue should be the number one choice,” Kenyon said. “This is a five-year commitment. It’s not just about COVID it’s about infectious diseases and community health overall and the fact that we have an expert candidate who is willing to volunteer for this position and we’re willing to overlook that in light of the fact that the entire medical community is behind this candidate is a sad and disappointing day.”

After questions, Sánchez repays more than $200 in personal expenses charged to campaign

Who will take doctor seat on CDH board? Ada Co. holds off on decision, asks for more public input

Inside Idaho: The story of Garden City’s heritage and how it got its name